So what is the difference between functional and dysfunctional breathing? 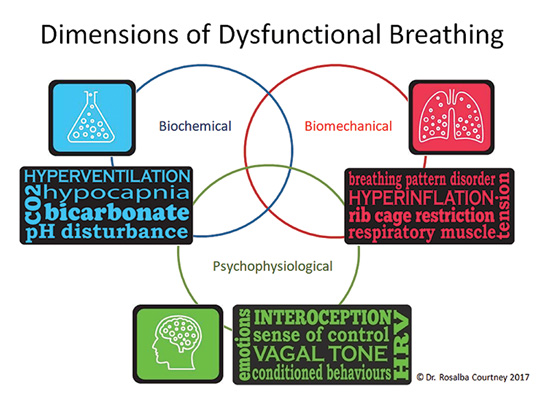 This was a key driving question in my PhD research called “Dysfunctional breathing: its parameters, measurement and clinical relevance”. The real practical aim of my research was to create a standardised protocol for the assessment and treatment of dysfunctional breathing. I knew from my training and clinical experience as an osteopath that it’s not possible to assess or treat any condition well until you understand its characteristics and parameters well enough to define it.

So firstly let’s consider the question “What is functional breathing?”

The conclusion I came to is that functional breathing is breathing that most efficiently performs its various functions taking into accounts the circumstances and condition of the patient.

Next question “What are the functions of breathing?”

The primary functions of breathing are:

The biochemical function of breathing has to do with the regulation of oxygen, carbon dioxide and the pH of the body.

Functional breathing has EAARS – I created the EAARS acronym as one way to think about whether a person’s breathing is functional.

The EAARS model acknowledges the dynamic, ever changing nature of healthy breathing and the fact that the way a person breaths may represent their best attempt to compensate for pathology or structural deficit or even psychological state.

Using the EAARS model to evaluate breathing functionality, we are concerned with how effectively the breath changes and responds to meet the body’s changing needs rather than just looking at static measures and textbook norms.

The EAARS model for evaluating functional and dysfunctional breathing takes us away from rigid ideas about optimal breathing and opens up possibilities for innovative ways of approaching breathing retraining that are respectful of the body’s own healing and compensation mechanisms.

Here is a letter by letter detailed description of the  EAARS acronym.

At the most basic level it helps to understand that functional breathing is breathing that adapts appropriately to activity and rest. At rest we should ventilate much less than during physical activity or during arousal. When breathing does not adapt to the condition of rest we might find that the person’s breathing is beyond their metabolic requirements (giving low CO2  – hyperventilation) or that their breathing pattern stays in the active upper thoracic configuration and does not move to the relaxed abdominal configuration when they are in a position of rest.

So what is “Dysfunctional Breathing”?

In a nutshell dysfunctional breathing doesn’t have EAARS, it’s not efficient, adaptive, appropriate, responsive or supportive of health. It produces symptoms and contributes to vicious cycles of pathology and dysfunction in other body systems.

I developed the multidimensional model of dysfunctional breathing and the EAARS model of breathing functionality as the guiding principles of what I call Integrative Breathing Therapy.

If you want to know more about the validated assessment and treatment tools of Integrative Breathing Therapy please consider taking my one-day course. Details here:

Integrative and proactive strategies for maintaining health in the era of COVID-19
June 26, 2020
TOPICS