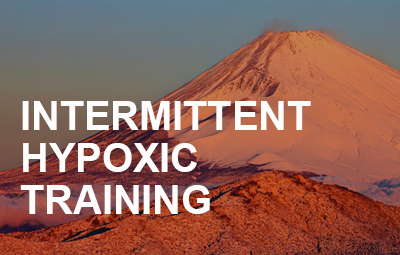 Intermittent Hypoxic Training (IHT) involves brief periods of breathing air that’s modified to provide mild controlled doses of hypoxic (oxygen reduced) air for the purpose of producing a range of beneficial physiological adaptations similar to those that can occur when humans adapt to high altitude environments.

Decades of research in the former Soviet Union showed that IHT could achieve the same benefits as sustained exposure to high altitude conditions (Serebrovskaya 2002).

During IHT the person alternates breathing oxygen reduced air with room air or with oxygen enriched air, through intervals typically several minutes long. IHT breathing programs are individually selected for each individual in accordance with their adaptive capacity, condition and training objectives.

A sample IHT program can involve 10-30 sessions which involve breathing moderate hypoxia (9–16% inspired O2) for 3-7 minutes alternating with normoxia or hyperoxia (21-35%O2) for about 3-5 minutes for 60 minutes.

Oxygen is the most essential element for our survival, and the adverse consequences of hypoxia are well known, so its surprising to many to hear that controlled exposure to oxygen deficit (or hypoxia) if within a person’s adaptive range, can actually promote longevity, enhance physical performance and even help to create conditions that support healing in certain diseases (Serebrovskaya 2002, Verges, Chacaroun et al. 2015).

The reason this occurs is that brief, intermittent exposure to hypoxia stimulates a range of the body’s adaptive responses through epigenetic changes and increased expression of genes like hypoxia inducible factor (HIF), uncoupling protein 2 (UCP2) and methyl-tetrahydrofolate reductase (MTHFR) that are involved in angiogenesis, glycolysis, lactate shuttling, glucose transport, capillary density and mitochondrial function. Hypoxia has protective effects on the cell and on DNA because it induces p53, a transcription regulation factor that  is sometimes called the “guardian of the genome”. It has a protective and repairing role in DNA damage.

The end result of hypoxia adaptation is improved oxygen, better circulation, improved mitochondrial function, increased tolerance to various stressors and even toxic chemicals, increased antioxidant production and reduced inflammation (Kayser and Verges 2013, Verges, Chacaroun et al. 2015). These adaptive changes enhance physical and mental capacity, so that the body is better able to cope with a range of stressors and repair and heal cells  tissues and organs. The Russians have led the research in this field since the early 1960’s  and have been applying what they have found to medicine, sport and physical conditions (Serebrovskaya 2002). In recent years research done in the USA, Europe and China has added to the body of knowledge on IHT and its clinical applications.

Other far reaching effects on general function of the organism occur because of the principle of “cross adaptation’ (Meerson 1993). Adaptation to one type of stress or load will, to some extent, increase the body’s ability to cope with stresses of another type. It is well known that a regular exercise program is associated with an increased tolerant to stress. Stress-related diseases such as hypertension, heart disease, ulceration of the stomach or duodenum, diabetes, dermatological diseases and disordered immunity have all been shown to improve with both exercise and IHT. Protection comes because the body becomes more tolerant and resistant to stress. Dr. F.Z. Meerson, a key researcher in the field of Adaptive Medicine, describes how a stressor can increase stress resilience:

Other key physiological mechanisms of IHT

Oxygen and blood flow- Hypoxia leads to the production of hypoxia-inducible-factor (HIF-1). This leads to production of vascular endothelial growth factor (VEGF) and stimulates EPO production.

Nitric Oxide- IHT increases endothelial production of nitric oxide (NO) which has the short term effect of increasing regional cerebral blood flow and augmenting the vaso- and neuroprotective effects of endothelial NO in conditions such a hypertension. However, the body also needs to be protected from excessive production of NO by microglyia, astrocytes and cortical neurons as this generates neurotoxic peroxynitrite.   Controlled exposure to IHT which promotes adaptation to hypoxia prevents NO overproduction in the brain and other tissues, and enhances storage of excessive NO in the form of S-nitrosothiols and dinitrosyl iron complexes. The end result is neuro-protection of various pathologies, reduced blood pressure (Lyamina, Lyamina et al. 2011) and a reduction of oxidative stress (Malyshev, Bakhtinia et al. 2001, Manukhina, Downey et al. 2016).

Hypoxia and Stem Cells- Stem Cells mostly arise from our bone marrow and are involved in regenerating and repairing body tissues damaged from daily wear and tear. Stem cells are most abundant in fetal circulation where oxygen levels are very low. They disappear from circulation soon after birth but survive in various hypoxic niches in adulthood. They act as a pool of undifferentiated cells that can be used to repair bone, cartilage, muscle, blood vessels, nerves and other body tissues. They  can undergo trans-differentiation to other cell types, such as liver cells, neurons, cardiac myocytes and vascular endothelium.

The quantity of stem cells in peripheral blood fluctuates and various stressors including exercise, inflammation and hypoxia can mobilise stem cells into circulation so that they can then move to areas where they do their regenerative work.

Hypoxia – a matter of dose

Intermittent hypoxia (IH) has been a subject of considerable investigation from the viewpoint of its adverse and beneficial effects. Recent studies reveal that IH has varied effects on multiple body systems and that the magnitude of these effects (and even the direction) depends on the IH “dose”. With low cycles-per-day counts and/or mild to moderate hypoxic episodes beneficial effects are predominant (Navarrete-Opazo and Mitchell 2014, Verges, Chacaroun et al. 2015). Low doses of IH in the body’s adaptive range can have a directly opposite effect to those demonstrated in patients with sleep apnea, respiratory insufficiency, stroke or infarct (Serebrovskaya, Manukhina et al. 2008, Burtscher, Haider et al. 2009). Notably there have been no reported cases of adverse events from clinical use of IHT in the scientific literature (Rosalba Courtney 2015-unpublished literature review). 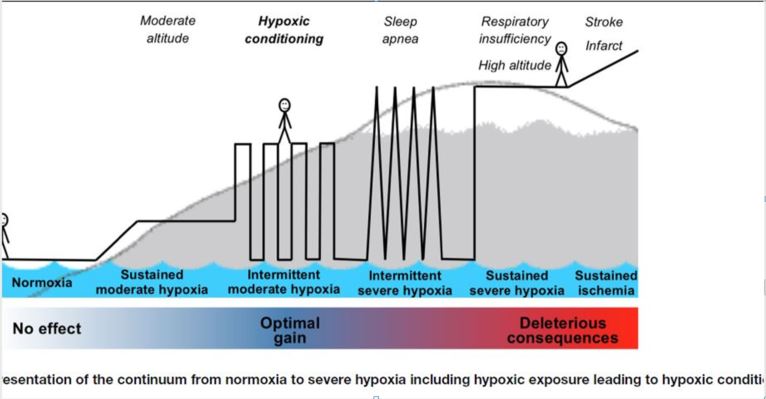 Literature on specific conditions and IHT

(English language research and reviews only)

Dirnagl, U., K. Becker and A. Meisel (2009). “Preconditioning and tolerance against cerebral ischaemia: from experimental strategies to clinical use. .” Lancet Neurol8: 398-412.

Serebrovskaya, T. V. (2002). “Intermittent hypoxia research in the former Soviet Union and the Commonwealth of Independent States: History and review of the concept and selected applications.” High Altitude Medicine and Biology3(2): 205-221.

Serebrovskaya, T. V. (2002). “Intermittent hypoxia research in the former soviet union and the commonwealth of independent States: history and review of the concept and selected applications.” High Altitude Medicine & Biology3(2): 205-221.

Dr Ron Ehrlich podcast – ‘How the Power of Breath and an Integrative Approach to Breathing Therapy can Transform your Life’
December 7, 2022